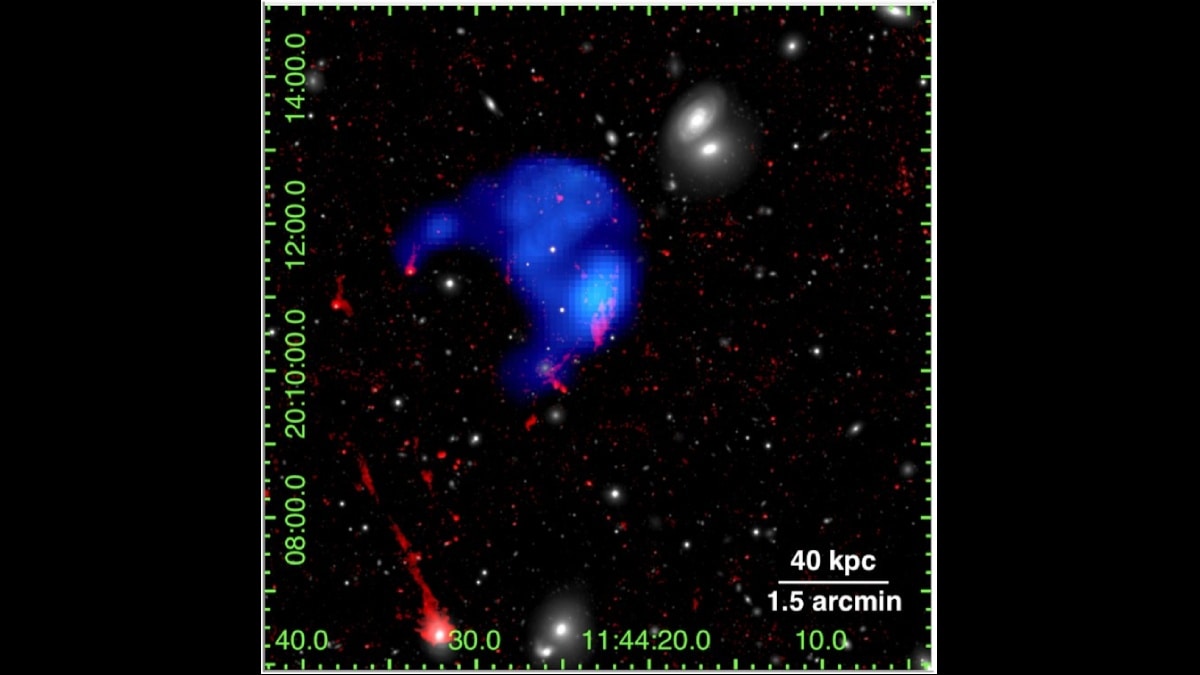 A team of astronomers has discovered a huge cloud of hot, faintly glowing gas in space that is bigger than the Milky Way galaxy. They said that the cosmic gas cloud, the first of its kind, may have stripped from a galaxy. What they found most surprising was that the cloud has remained clumped together for hundreds of millions of years without dissipating. The team, led by astronomer Chong Ge, University of Alabama, Huntsville, US, used the European Southern Observatory’s (ESO) XMM-Newton X-ray telescope and Multi-Unit Spectroscopic Explorer (MUSE) on the Very Large Telescope (VLT), along with Subaru Telescope, to carry out the study.

Upon analysing X-ray emission, researchers found that the cloud was larger than they initially anticipated it to be. They said the cloud may have a mass of around 10 billion times that of the Sun.

The study titled, “An H α/X-ray orphan cloud as a signpost of intracluster medium clumping,” has been published in the Monthly Notices of the Royal Astronomical Society. The full study can be accessed here.

Physicist Ming Sun from the University of Alabama in Huntsville, said that it was an exciting and surprising discovery. “It demonstrates that new surprises are always out there in astronomy, as the oldest of the natural sciences,” Sun said.

The study showed that the cloud’s temperature ranged between 10,000 and 10,000,000 Kelvin. This is consistent with gas found within galaxies and an indication that the cloud gas ripped from a galaxy as it moved through space.

One of the other aspects of the cloud that astronomers wanted to understand was how the gas, despite stripping from its galaxy hundreds of millions of years ago, didn’t diffuse. They performed calculations to find out that a magnetic field could hold the gas cloud together against the instabilities for long periods. Having said that, the scientists also concluded that given the mass of the cloud, the galaxy it ripped from was also “large and massive,” and this may help them track which galaxy it was.

The current data will also help researchers in future to identify other similar clouds. Scientists said that they now had observational evidence that the intracluster medium can divest galaxies of their gas.

“As the first isolated cloud glowing in both the H-alpha spectral line and X-rays in a cluster of galaxies, it shows that the gas removed from galaxies can create clumps in the intracluster medium and these clumps can be discovered with wide-field optical survey data in the future,” Sun said.